Crowdfunding seems to becoming more talked about on the internet and I have recently seen quite a few interesting projects which have been able to go ahead because of the efforts of a crowdfunding campaign.

So what is Crowdfunding?

Crowdfunding (alternately crowd financing, equity crowdfunding, crowd equity, crowd-sourced fundraising) is the collective effort of individuals who network and pool their money, usually via the Internet, to support efforts initiated by other people or organizations. (Source Wikipedia)

It’s an interesting concept really that allows projects that may not have been funded through the normal channels to still go ahead. I think it also allows individuals to buy into someones vision for a project and really stand behind it and make it successful.

So, sounds easy? Well it’s not quite as easy as you think. Recently I was following Lorna Sixsmith of Irish Farmerette as she went through the Crowdfunding process to bring her dreams of publishing a book to reality. She used Fundit to raise 6000 euro to publish her book Would You Marry A Farmer? Having read her articles, progress reports and her blog post on www.writeontrack.ie it seems that Crowdfunding isn’t for the faint hearted.

Lorna is very much a social media expert, but it’s clear that there is a lot of preparation and ongoing promotion required to keep a campaign like this from being lost in cyperspace. Here are 10 things she suggests you do BEFORE you even start. 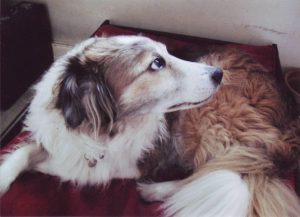 So how is Crowdfunding related to owning a pet? Well I have also recently seen a number of Crowdfunding projects to raise money for vets bills.  We have all had a huge vet bill for our pets at one time or another. Often people have Pet Insurance to cover this, but many times we don’t or the cover we have is not sufficient for the care they need.

This Spay and Neuter Campaign raised over $13,000 in just one month.

Over $10,000 was also raised for a Cat who needed an operation after being surrendered.

One a little closer to home is for Muffin, a guide dog in Dublin. Muffin has been a customer of Pet Sitters Ireland for many years now. He is a lovely dog and does a great job as a guide dog for his owner.

Unfortunately Muffin is getting older and is in need of some medical treatment.

It’s clear that Crowdfunding can work and in the case of animals people can be incredibly generous. It seems though that there is a lot of work to be done to spread the word of what your Crowdfunding campaign is all about.

If you are considering starting your own Crowdfunding campaign for your pet or for that book you always meant to write!! then I would read around the subject and set out your plan of attack. Lorna has some fantastic articles and is very open about what she could have done better/different during her journey.

Let us know how you get on if you decide to go ahead!