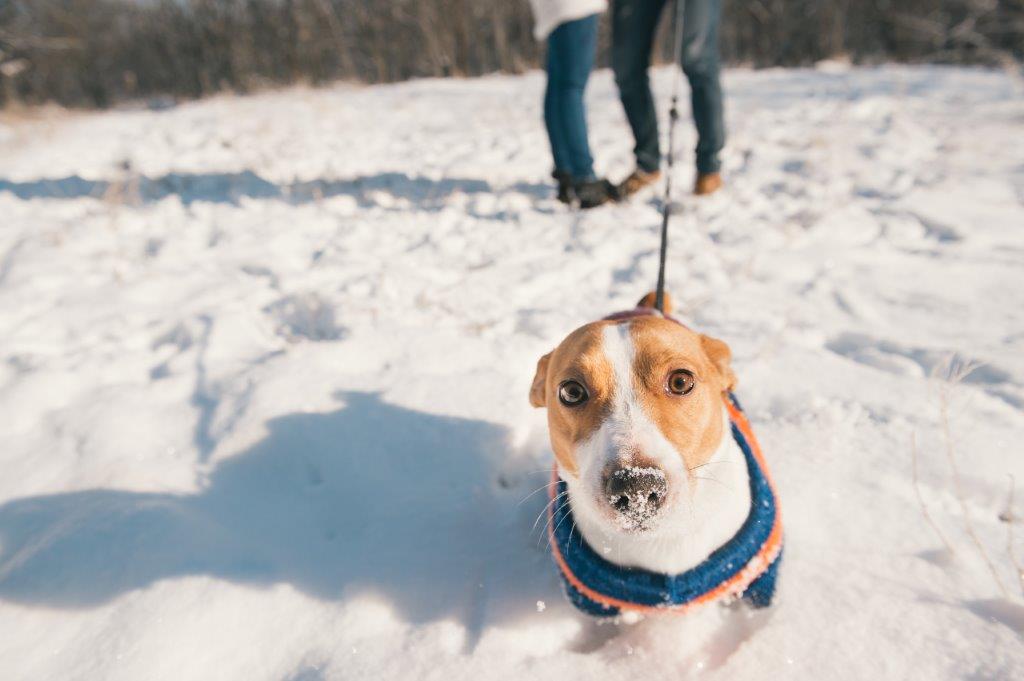 How To Keep Your Dog’s Paws Safe During The Snow

When the weather gets colder it’s important to take precautions when out walking your dog to make sure that your dog’s paws are safe and comfortable.

Much like we feel the cold, so will your dog. Ice between their paws will cause discomfort and antifreeze and salt can be dangerous to dogs.

While we don’t get lots of snow every year, when we do get it we need to make sure our fur friends are looked after.

Can Snow Hurt A Dog’s Paws?

If ice gets stuck between your dogs paws it very uncomfortable for them and can cause discomfort when they walk.

The snow attaches to your dog’s hair and then melts due to their own body heat. This then forms ice balls which push your dog’s toes apart and cause a lot of discomfort in the form of cracking and pulled hair.

In severe cases your dog could also get frostbite if snow is not removed or your dog is in the snow for a prolonged period of time.

How do I keep snow off my dog’s paws?

There are a number of ways to keep snow off your dog’s paws or minimise the effects the snow has on your dog.

#1. Trim the hair around your dog’s paws

If you have never done this before you might want to consult your vet or groomer. Removing the hair will stop snow clinging to it and causing pain for your dog.

#2. Put vaseline on your dog’s paws

A small amount rubbed onto your dog’s paws before a walk can help protect them from the snow. Snow and ice will not be able to stick to their paw if you apply this before any walks or outside play time.

If your dog wants ultimate protection from the snow then you can get dog booties. They may require some getting used to and some dogs may not like them at all. But, they will protect them from snow and also any salt or antifreeze they might come into contact with.

#4. Rinse your dog’s paws after a walk

If you are doing this then make sure the water is not too hot for them. It should only be luke warm. Brush away any excess snow first and then dip their paw in the warm water and dry to remove any ice.

If you can clear snow and ice from paths and roads around your home then it means your dog is not getting as much contact with the snow.

Make sure you wash your dog’s paws if you are using any salt to clear paths, as most dogs will lick their paws when they are wet after their walk.

The Dangers Of Grit And Salt To Your Dog’s Paws

The grit that is placed on roads to get rid of ice and stop people slipping over can be dangerous for your dog.

Most, if not all, are not dog friendly and contain chemicals which can produce burns on paws if they come into prolonged contact with the grit.

If possible you should avoid walking on gritted surfaces and always wash your dog’s paws after a walk.

Dog boots can be a great alternative in heavily gritted areas.

A spokesperson for the RSPCA said: “We urge pet-owners to be cautious when grit is being spread on roads, as rock salt can be toxic to dogs and cats if they lick it from their paws or fur.

“This is because ingestion can cause a high blood sodium concentration which can cause thirst, vomiting and lethargy, and in severe cases kidney damage.

“The best thing to do is to thoroughly wipe your pet’s feet, fur and tummy after they have been outside.”

What the RSPCA says about grit

What harmful effects does grit have on cats and dogs?

Grit may cause pain or irritation in your pets paws, especially if it becomes compacted with snow. The salt content in grit can also make it hazardous to pets if they ingest it. If ingested it can cause vomiting and lethargy and in severe cases there is also a risk of kidney damage. Most cases involve animals that have walked through gritted snow and then lick or chew it off their paws as it can cause irritation.

What exactly in the grit causes these effects?

Grit is often actually rock salt which is a mixture of salt (sodium chloride) and grit. Rock salt lowers the freezing point of moisture on the road surface, so it stops ice forming and causes existing ice or snow to melt.

Can any action be taken? If so, what?

It’s best to wash your dog’s paws in warm water and dry them thoroughly after a walk in the snow – this removes any compacted snow and prevents salt from gritted snow irritating their paws. It’s also best to wash their tummy and undercarriage of any snow too to prevent them from being able to lick and ingest any rock salt.

If you suspect your pet may have ingested rock salt contact your vet immediately and follow their advice.

What advice would you give to cat and dog owners in the snow when grit is spread everywhere?

Wherever possible avoid walking dogs in areas where the snow has been gritted and always thoroughly wash paws following a walk.

If you believe your pet has ingested rock salt then contact your vet immediately.

What do you do to keep your dogs paws safe in the snow? Let us know in the comments below