As a cat owner, we love to know why our cats do certain things and why they react to different events. You may have seen that there are several videos circulating online showing that cats are afraid of cucumbers. Have you tried showing a cucumber to your cat? Before you do that, read this article first and understand why cats react that way each time they see a cucumber and discover if cats are afraid of cucumbers.

Why are Cats Afraid of Cucumbers?

#1. Cats are Afraid of Anything that Sneaks Up on Them

If you notice on the videos, cucumbers were placed without the cats noticing them. And when they turned around and saw the green, elongated vegetable behind them they got surprised and jumped into the air and ran away quickly.

There is no video that shows that a cat got frightened by a cucumber that was shown to them directly. So, it is the unexpected sight of the cucumber behind them that’s startled them and not the vegetable itself. Try placing another item behind them without them knowing it and check out their reactions. According to animal specialist Dr. Roger Mugford, the cat’s reaction is due to the unexpectedness of discovering an unfamiliar object placed behind them.

Felines are suspicious of things that are unfamiliar to them, anything that moves fast and produces a lot of noise. They get scared of anything that they do not understand.

Another theory that experts are considering it that they thought the cucumber was a snake. Jill Goldman, an animal behaviourist believes that the cat could have mistaken the cucumber as a snake. Since they are not familiar with the vegetable, seeing a long object by surprise may make them think that it’s a snake.
Even humans might get scared if they saw a shape like this that they didn’t recognise. The cat is not used seeing this shape lying on the floor without any sound, which could make them think that the vegetable is a predator.

The Truth About Cats and Cucumbers

Studies about cats being afraid of cucumbers have been piling up and most of them conclude that cats are not really afraid of the vegetable. There are even some videos posted online showing cats simply passing by the cucumber without getting scared.

It seems like there is no scientific study to back up the conclusions of others that cats are afraid of cucumbers. Expert animal behaviourists believe that if you introduce the vegetable to them and make them familiar with it, they will not get surprised even if you place it behind them unknowingly.

Testing this theory can, however, cause your cat a lot of stress so it is not advised. According to a certified applied animal behaviourist, Patricia B. McConnell, Ph.D. chronic stress can suppress the immune response of your cat. This can cause a broad range of illnesses.

The Answer – Are Cats Afraid Of Cucumbers?

So, to answer the question why are cats afraid of cucumbers, the truth is they are not afraid of the vegetable. What surprises them and makes them jump up in the air and run is the fact that there is an unknown object that looks like a snake beside them. But once they get familiar with the vegetable, they will not get surprised and will simply ignore it when they see it again.

Is Your Cat Afraid Of Anything? Let Us Know In The Comments Below. 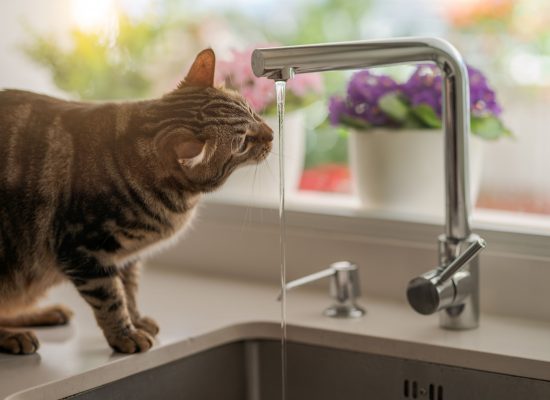