If you’re looking for a unique cat that combines the much-loved domestic cat and the wildness of an exotic Asian cat, then the Bengal Cat is the cat for you! Originally bred in the USA, Bengal cats were created by mixing an Asian Leopard cat with a domestic cat.

We’ve put together a list of FAQs and some need to know information relating to the Bengal Cat!

What Is The Temperament of a Bengal Cat?

Research has shown that first, second and sometimes third generation Bengal cats possess an inherently wild disposition. However most breeders and Bengal enthusiasts argue this and claim that they can be tamed quite easily and are affectionate. They mix well with children, dogs and other cats, but they have a high prey drive and owners should be cautious if they also own small animals such as rabbits or hamsters.

Although Bengal cats have a “wild” or “exotic” look about them, they are no more aggressive than any other cat. The goal in mind when creating the Bengal cat was having the beauty of a wild cat whilst also maintaining the temperament of the domestic cat, so it will still be affectionate, playful, curious etc.

What Is The Average Size of a Bengal Cat?

They are fully grown at 2 years old.

What Are Bengal Cat Characteristics?

This seems to be one of the most asked questions on Google in relation to Bengal cats. This is partly due to the similarities between Bengal cats and Tabby cats in appearance.

A quote I saw which describes this issue well is “All Bengal cats are tabbies but not all tabbies are Bengals”. “Tabby” refers to fur markings. Most people think that Tabby is a breed of cat but it is any domestic cat that has a coat featuring patterns such as distinctive stripes, dots, lines or swirls, usually together with a mark resembling an ‘M’ on its forehead.

Bengals have two types of fur patterns, spotted pattern (most common) and swirly marble. Both of these patterns are tri-coloured. Their coats also resemble wild larger cats like jaguars. Common household tabby cats have a symmetrical pattern on both of their sides. Bengals do not have this symmetry and this is unique to the Bengal breed. So, if you look at your cat’s fur and if the fur markings are the same on both sides, you don’t have a Bengal, if it’s different, you do.

A Bengal cats head should be quite small in comparison to its body. Their ears are quite small too which is a feature of their wild ancestors.

Another feature of the Bengal cat is what’s known as a “Thumbprint”, which is a patch where the fur is very short and in the shape of a thumb. Many tabby cats also have this “thumbprint”.

A Bengal cats back legs are slightly longer than the front ones which gives the appearance of an arch on its back.

The most popular Bengal colours are brown/black. There are also a variety of other shades, including black and silver, seal brown and silver, charcoal, and blue. Their eyes also come in a variety of colours, green, gold/yellow, or aqua/blue.

Bengals have short thick hair and thus have very little shedding. They wouldn’t be considered “high maintenance” like Persians or Maine Coons that we have previously talked about. They enjoy water so a bath every now and again would be both beneficial to their fur and they’ll enjoy it too!

Bengal cats are also considered to be “Hypoallergenic” which means that they would be suitable for people with allergies. Although it is widely disputed that animals are rarely completely “hypoallergenic” and that some people’s allergies still flare up around these so called animals.

Although they may not be considered high maintenance, daily dental hygiene is important.

Yes, they are considered to be an intelligent breed and enjoy games such as fetch and they also enjoy puzzle games that they have to figure out. Their intelligence means that they are easily trained and can also be trained to walk on a leash.

On average, their lifespan is between 14-16 years. However, like other pedigree cats they can suffer from certain illnesses such as HCM (Heart disease) and PkDef (Chronic anaemia). The breeder should have its cats screened for such illnesses.

A way of pro-longing your cat’s life is by making it an indoor cat. Cats can run into many dangers whilst outside such as disease, injuries from other animals and cars. However, like previously mentioned, Bengals can be trained and are known to walk on a leash. A way of allowing your cat to experience a safe outdoor environment is by making a large outdoor enclosure with climbing frames as climbing is a personal favourite Bengal cat past time! 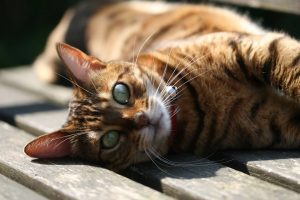 Yes! In fact, they love to talk!

How Much Do Bengal Kittens Cost?

In Ireland, the cost of Bengal kittens seems to range from €400- €700. However, we’d always recommend looking in rescue centres and pounds as they have hundreds of cats looking for their forever home.

If you own a Bengal cat, please post some photos in the comments, we’d love to see them!